We are delighted to report that the ridiculous ‘Battle of Cherrygate‘ has now been concluded. After Councillor Joanna Biddolph intervened to prevent planting of additional trees to fill in the gaps in the avenue of cherry trees on Turnham Green back in 2020, the Friends of Turnham Green, London Borough of Hounslow and Abundance London embarked on a long and difficult path towards resolution of the crisis. The original trees, which had already been purchased for the planting, had long gone elsewhere in neighbouring boroughs (admire the avenue of new cherry trees on Acton Green in Ealing, and in Heston at the far end of Hounslow), the thousands of pounds of donations had been withdrawn and lost, the Friends had rewritten their Constitution, re-elected their chair (the same chair), and a new committee had been installed.

Hounslow council ran an extensive open consultation over the past months during which hundreds of people voted. Yet again Councillor Biddolph demanded that the process be halted. Yet again the Chair of the Friends group protested that a democratic vote had been held. This time the council held its nerve and the consultation was allowed to run its course, resulting in a landslide majority in favour of the trees. 89.9% of nearly 400 respondents voted in favour of planting the cherry trees, a resounding vote of confidence in the original actions of the Friends, the council and Abundance.

So last week, only two years late and with around £20,000 of public money and goodwill wasted by the unnecessary intervention of the councillor, 18 new trees have been planted. These include nine cherry trees to complete the existing avenue. Leader of the council Steve Curran, in one of his last outings before standing down due to ill health, and Turnham Green Cllr Ron Mushiso, came along to celebrate the successful planting. Cllr Joanna Biddolph was apparently too busy to attend.

It felt very much like justice had finally been done. We look forward to many decades of beautiful blossom and healthy trees. 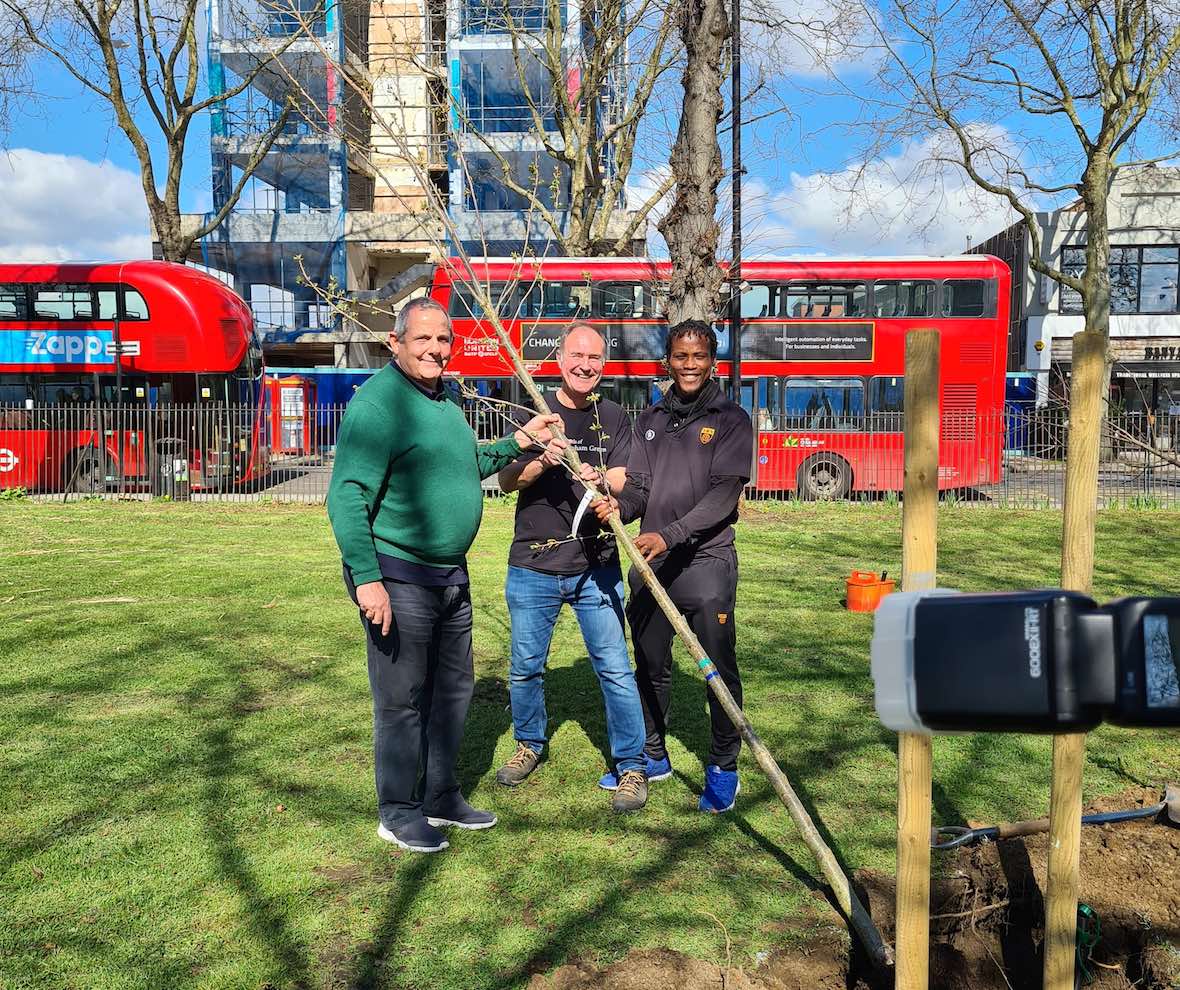 Abundance London has been resolutely apolitical in its 12 years of existence. We have worked in friendly co-operation with both our current Labour and past Conservative MPs. We work with Conservative, Labour and Liberal Democrat councillors throughout Chiswick and further afield.

However, Councillor Biddolph’s actions in this respect – and on other occasions – have caused our organisation active and reputational damage. In July last year the Hounslow Council Conservative Group issued the following apology, in response to comments posted on social media by the councillor: “Cllr Biddolph’s behaviour fell short of the high standards we maintain within the Conservative Group. I [the Chief Whip] wish to outline the disciplinary action I have taken and to apologise personally to you on behalf of the Group […] her actions were unacceptable and in breach of our standards.”

We look forward to working with all the new councillors, of whichever party, and should Cllr Biddolph be re-elected, we hope to go forward with a more positive relationship.

Abundance provided a damson tree for the Quakers new Friends’ house in Hammersmith, a crab apple for the Methodist Church on Sutton Court Road, and advice and encouragement for a new orchard at the Hounslow Masjid Mosque.

We continue to maintain our existing pocket gardens. Meanwhile Alison’s Wood, in Acton Green, is still in construction – with new benches awaited, more planting, and more logs for the hibernacula. The other Abundance gardens continue to flower and provide beauty, biodiversity and mental and physical health benefits for those enjoying them and working on them. Welcome to Hannah Encke who has recently taken over the library garden.

Although we had almost given up hope of this, as discussions with TfL didn’t go as hoped, nevertheless several promised new trees have been planted along the A4, and a new Duke of Edinburgh Award watering team has done its first bowser run to keep the new trees watered.

Submissions are now open for the new W4th Plinth to be installed in summer. See our website for details. Our Butterfly Wall – which was about to be removed several times over the past months – has been spared to give ongoing pleasure to us all on the Old Market Place. Soon it will be fluttering off to a new home.