Happy New Year, and may it be a healthy happy one. Despite various lockdowns Abundance had a busy year.

In March we planted up a wildflower meadow on the corner of the A4 and Sutton Court Road which flowered all season until we scythed it in late summer. 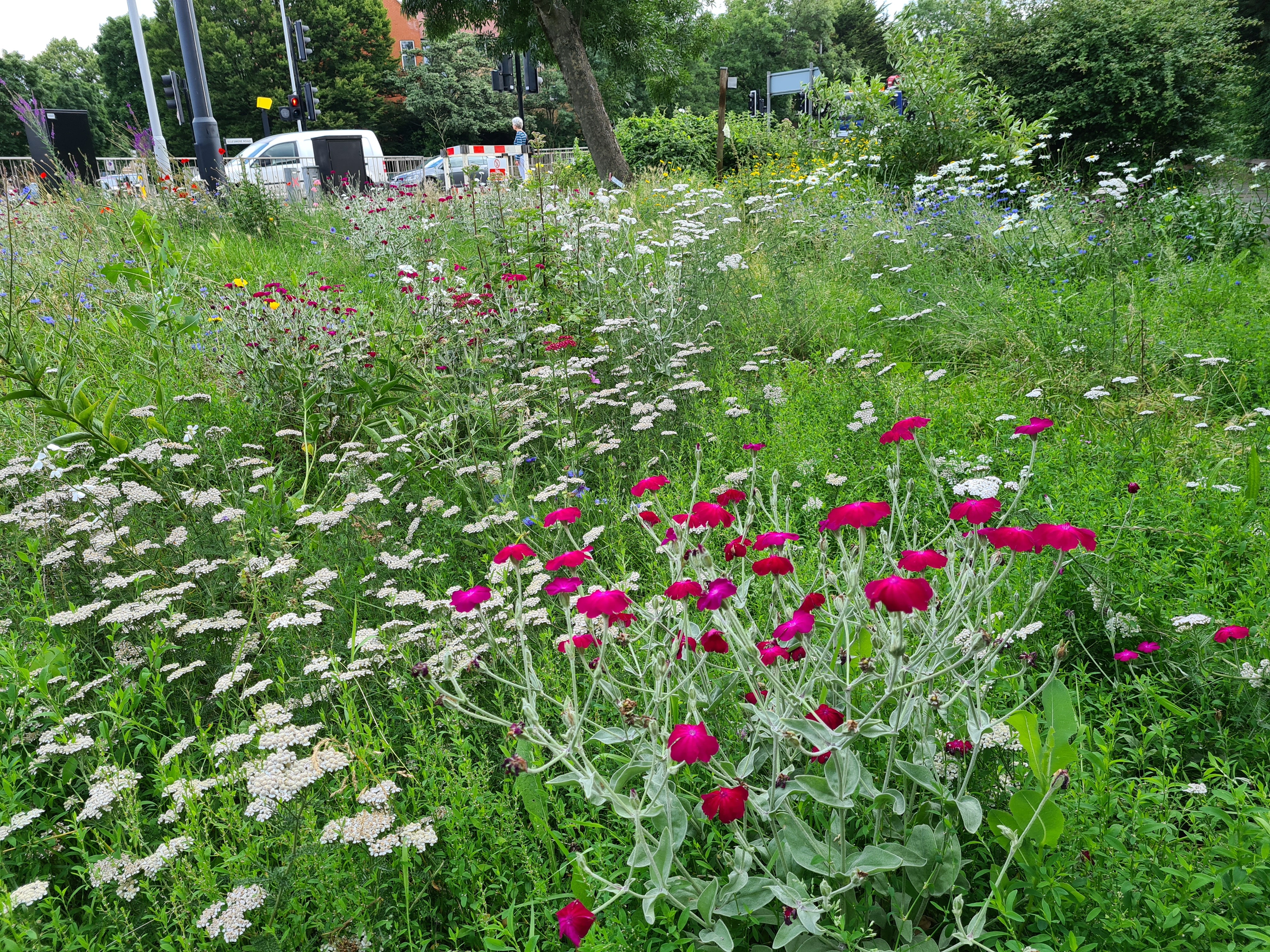 We created a treasure trail around 12 of our Chiswick gardens and gave prizes to those who completed it. You can download it here, print it out, and punch the orienteering holes as you tick off the gardens. 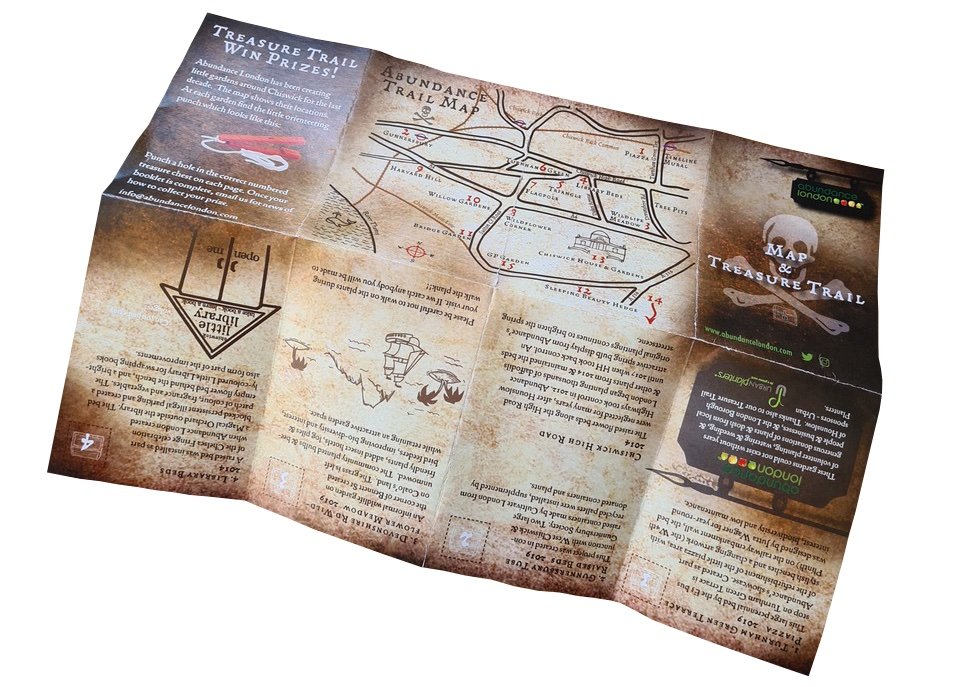 In April we held a Seed Swap, with donations from Thomas Etty heritage seeds.In May we created a new woodland garden, behind the subway entrance on the corner of Sutton Court Rd/A4 and we also funded new planters for Watermans Art Centre.From June Bets Kynoch started watering our new A4 trees as part of her Duke of Edinburgh award.

In July we installed new artwork on the W4th Plinth at Turnham Green Terrace, a Sarnie under the Tree of Life by Suzan Inceer, unveiled by Jeremy Vine. The most recent artworks were not voted on (pandemic stresses) but were selected via open submission by a jury headed up by Sir Peter Blake. 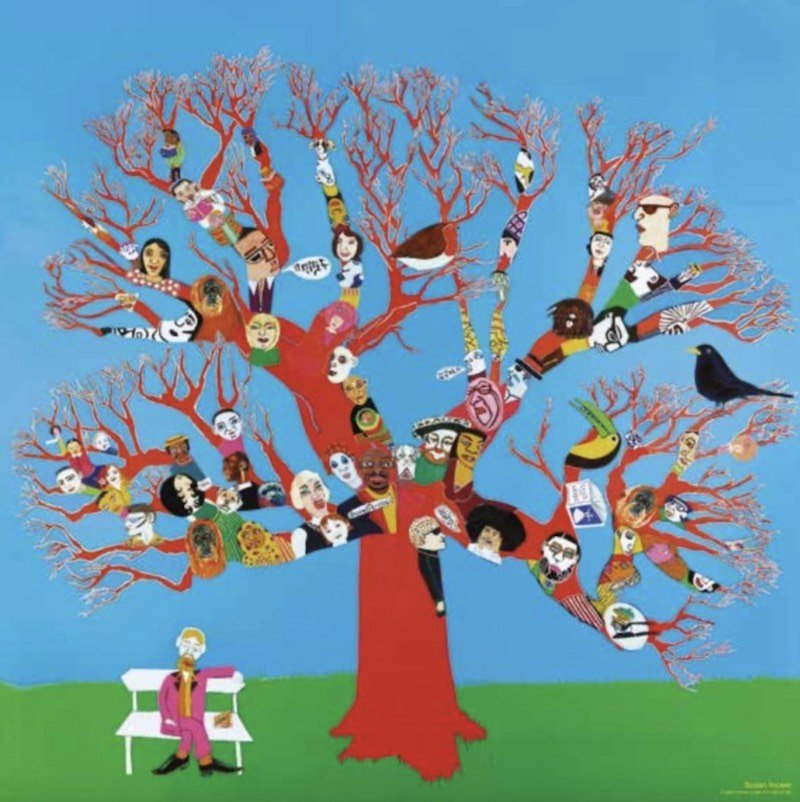 In AugustSam Reynoldscreated new planters and beds on Wellesley Roadas part of his Duke of Edinburgh award with Abundance.

In September we launched a major art project throughout the community, with groups and individuals throughout West London painting thousands of butterflies and flowers which were then varnished and wired, and installed on the 4-storeypolice station wall in October.We received funding from Hounslow, support from Make + Paint, and Artists at Home helped us to run an auction of butterflies and flowers created by generous local artists which helped us to raise funds. We also pressed a tonne of apple juice at the Chiswick Flower Market. 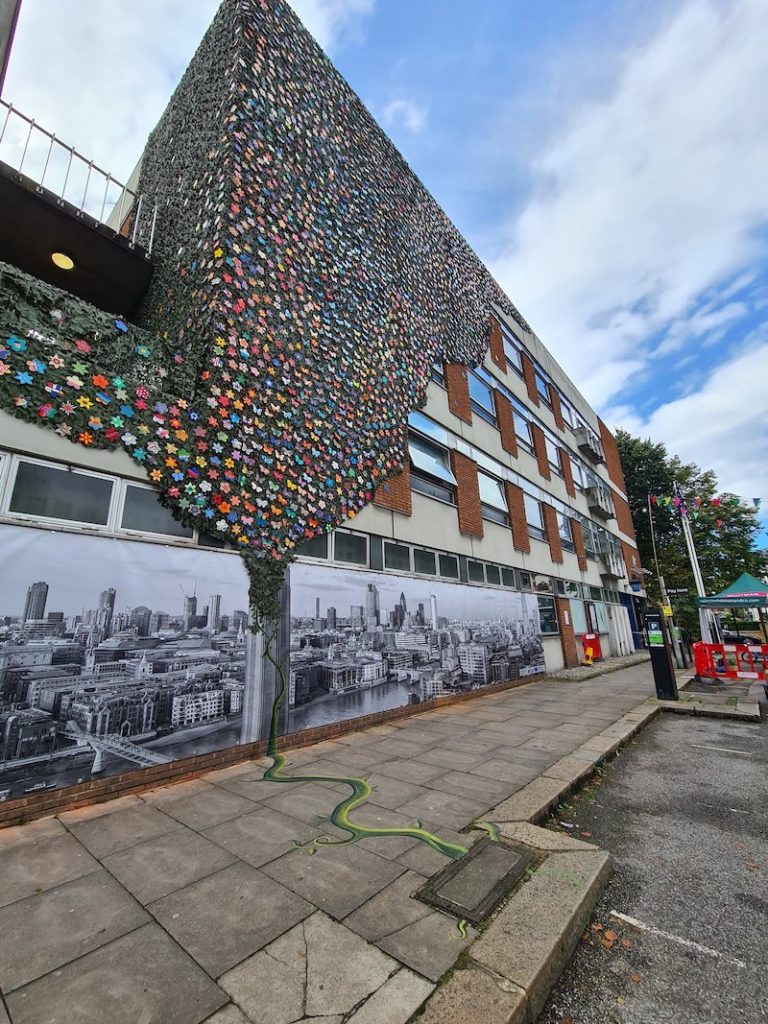 In November we worked with Ealing Council to plant Alison’s Wood, a new area of woodland on Acton Green planted up with birch and fruit trees, spring bulbs and woodland flowers, gently protected by a circle of hibernacula to offer habitat and texture.

D of E students Eleuthera Graham and Amina Kotb took over maintenance duties for the Heathfield Terrace triangle and we look forward to seeing the fruits of their intensive bulb planting (generously supplied by the Metropolitan Public Garden Association and Taylors Bulbs).

In December we funded a willow weaving project with Make + Paint, and Friends of Turnham Green to create willow lighted decorations with several Chiswick schools which were hung on Turnham Green over Christmas. 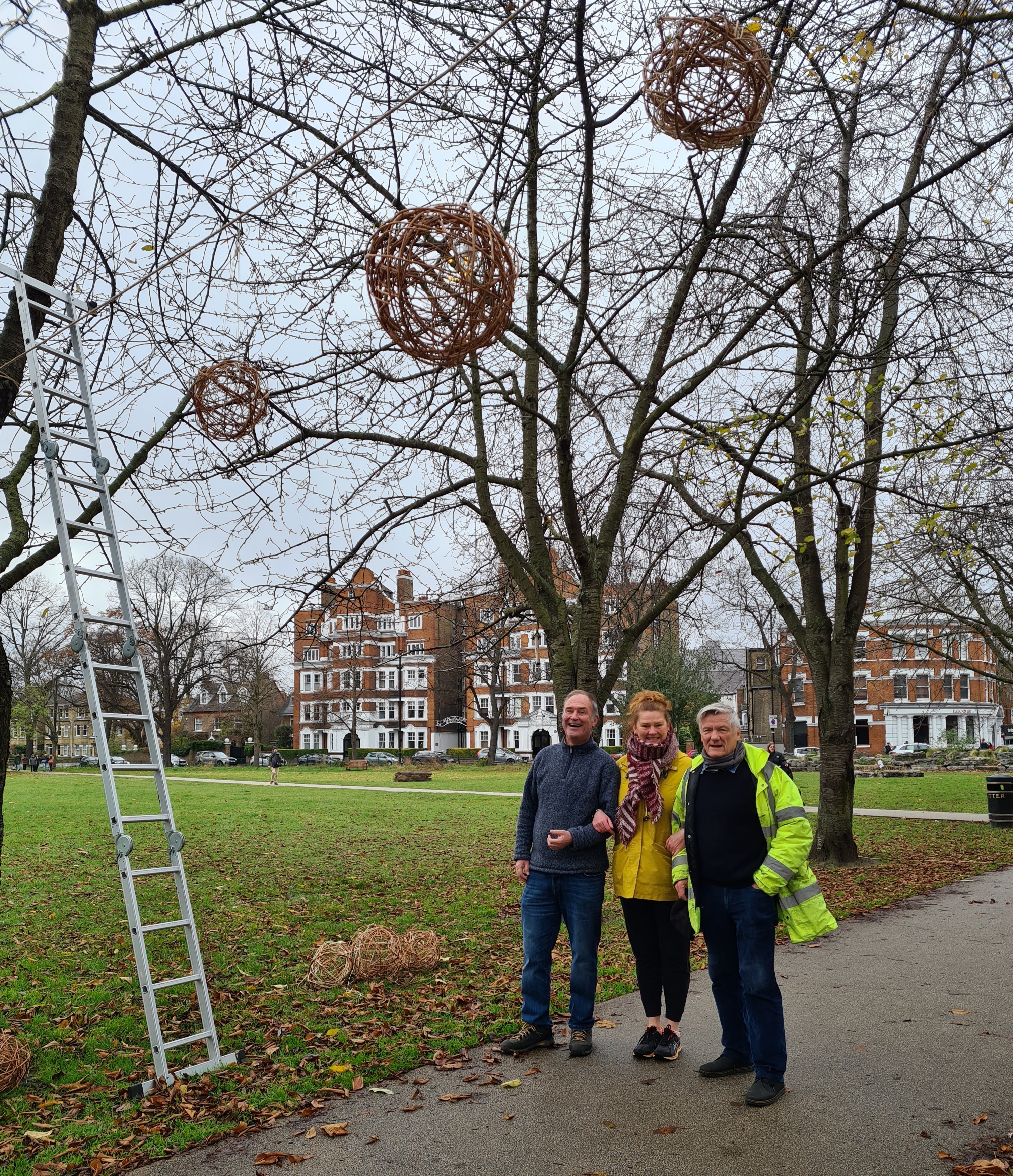 On the negative side
We gave up the Town Hall flagpole garden since London Borough of Hounslow assured us they have robust plans for the Town Hall – since then we have watched the garden with interest and one of our volunteers has gone back to weed and trim as she can’t bear to see it fall into neglect. We also gave up on the Sleeping Beauty Hedge along Burlington Lane after the council strimmed off most of the hedging plants; likewise our flowery border on the corner of Chesterfield and Sutton Court Roads was strimmed just as the scabious and eschholtzia poppies were about to flower. Some tree pits full of cosmos were also cleared. These experiences are discouraging – Hounslow has been “working” on its tree pit policy for 3 years now which, given many other councils have tree pit policies which could be cut and pasted into use, seems to us quite sufficient time to produce some simple guidelines.

The Great West Hedge
Throughout the year we worked with TfL, Hounslow and many other local groups to try and create the Great West Hedge along the A4. This started as an ambitious high thick hedge, then became more trees and biodiverse planting such as bulbs and shrubs, and ended up as an unambitious promise to plant 30 more trees. The only real results from this were ten new trees between Sutton Court Road and Barrowgate Road, and the experimental wildflower meadow on the corner of the A4 and Sutton Court Road with a buddleia and native hedging strip. TfL also promised to look into a few test hedge areas, eg. above Harvard Hill Park. The disappointing outcome of the Great West Hedge project (so far, anyhow!) sadly reflects not just the practicalities of planting along a 6-lane highway but also the current priorities of TfL which is to prioritise car traffic even though the air pollution and biodiversity crises are increasingly acute. 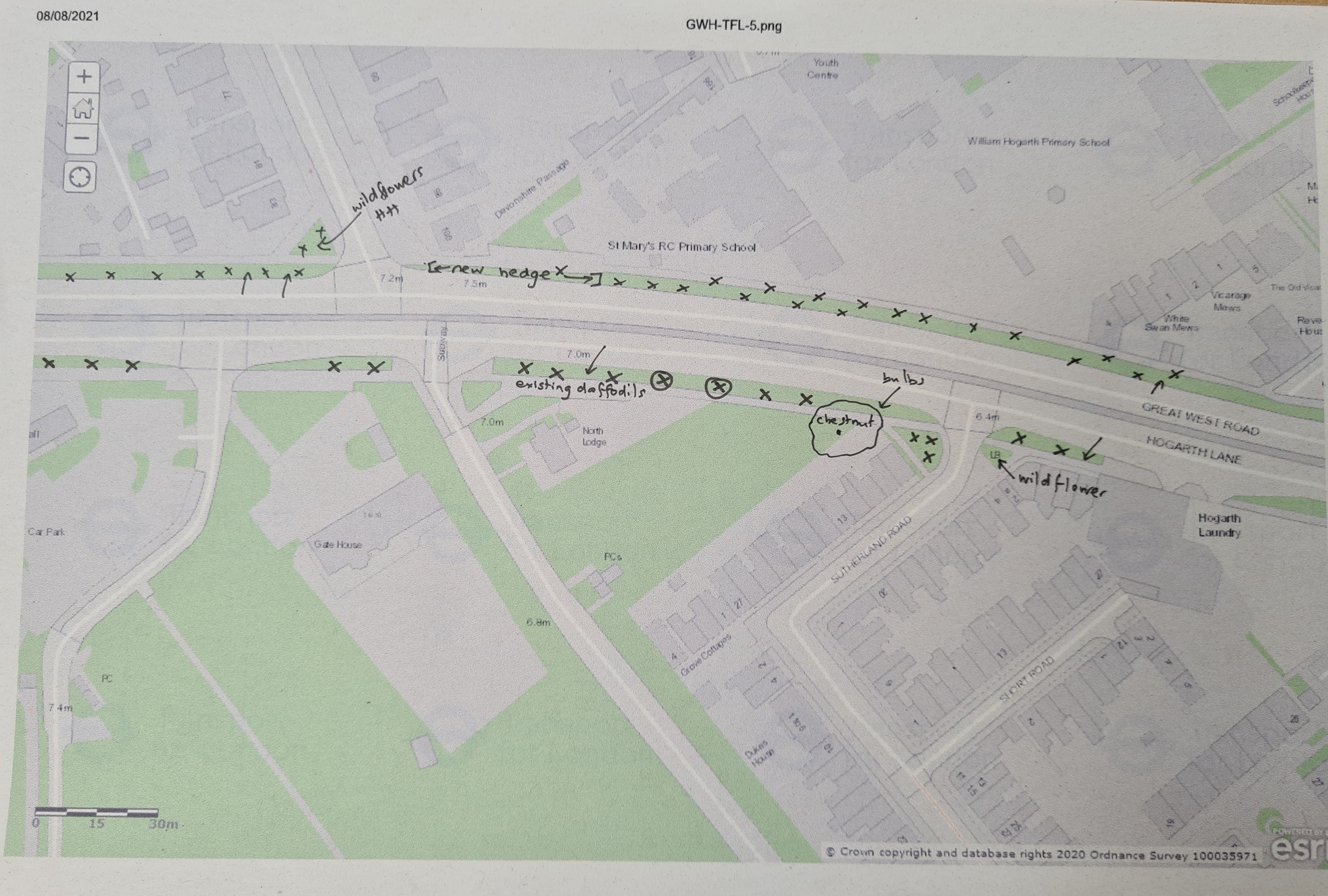 Even our wildflower corner patch was hard won: even though Abundance had permission from the London Borough of Hounslow and Hounslow Highways to create the meadow area TfL then demanded retrospective licences (£400) which we refused to pay. Our volunteers had spent many hours hand weeding the grass to leave beneficial weeds, and then plug planting and sowing the area. It attracted grasshoppers, bees and butterflies, and was much appreciated by passersby. We scythed it in the traditional way in September, and hope to leave it no-mow as an ongoing experiment next year to see how a low-maintenance highly stressed piece of land adjacent to exceptionally high passing traffic (from cars, trucks, pedestrians, wind, salt grit, pollution, particle pollution, crisp packets, beer cans, etc etc) can nevertheless provide benefit. We will keep pushing for the promised 30 new trees and the test areas.

We continued our fruit picking activities with a regular WhatsApp group dealing with tonnes of plums (July), apples and pears (August, September, October), quince and medlars (November). These were processed into jams, fruit cheeses, crumbles, preserves and much more. Some went to foodbanks and refugee hostels. In September we held a big fruit pressing event at the Chiswick Flower Market and produced gallons and gallons of free fruit juice for passersby. If you want to join the picking group, or have a tree that needs harvesting, get in touch. 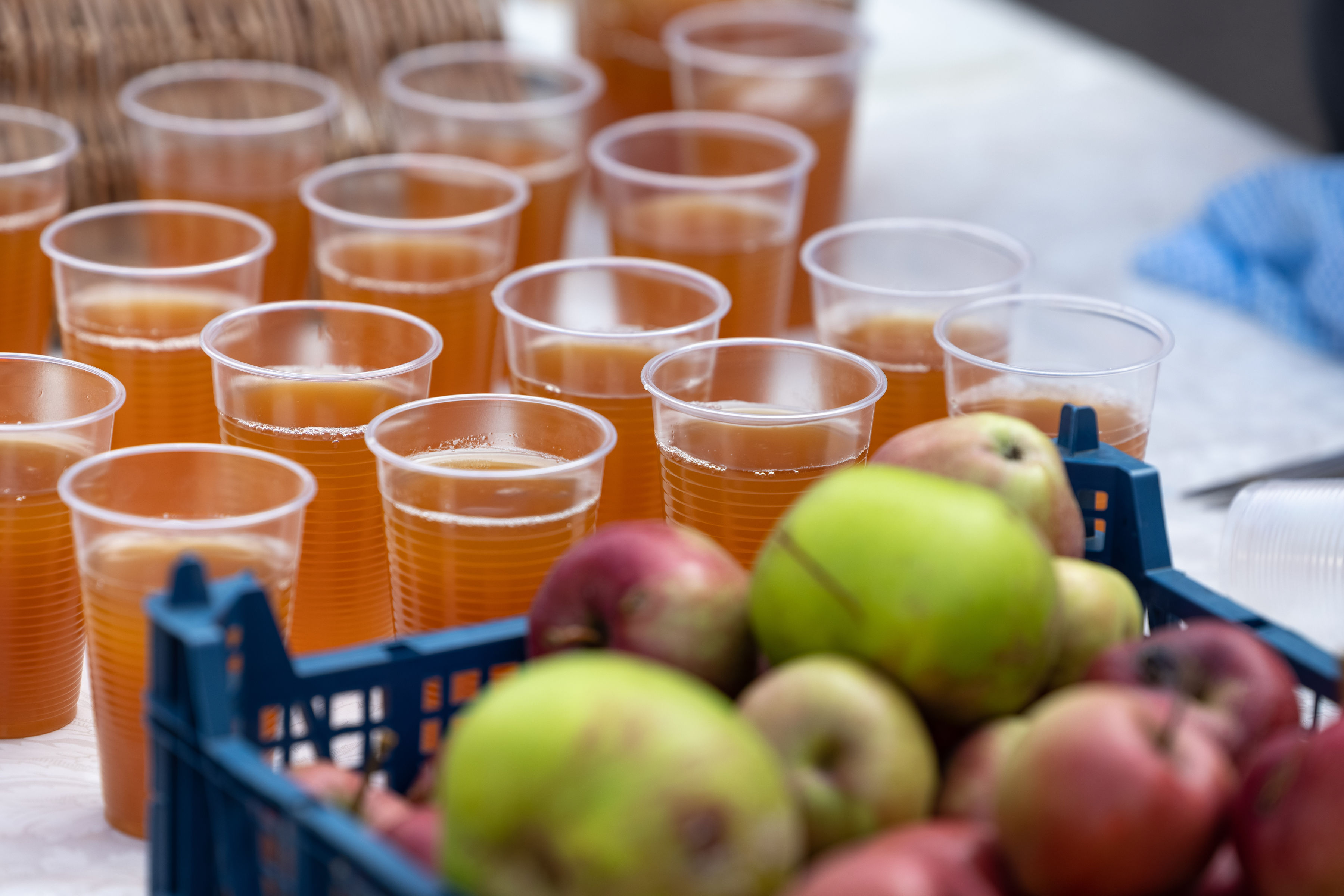 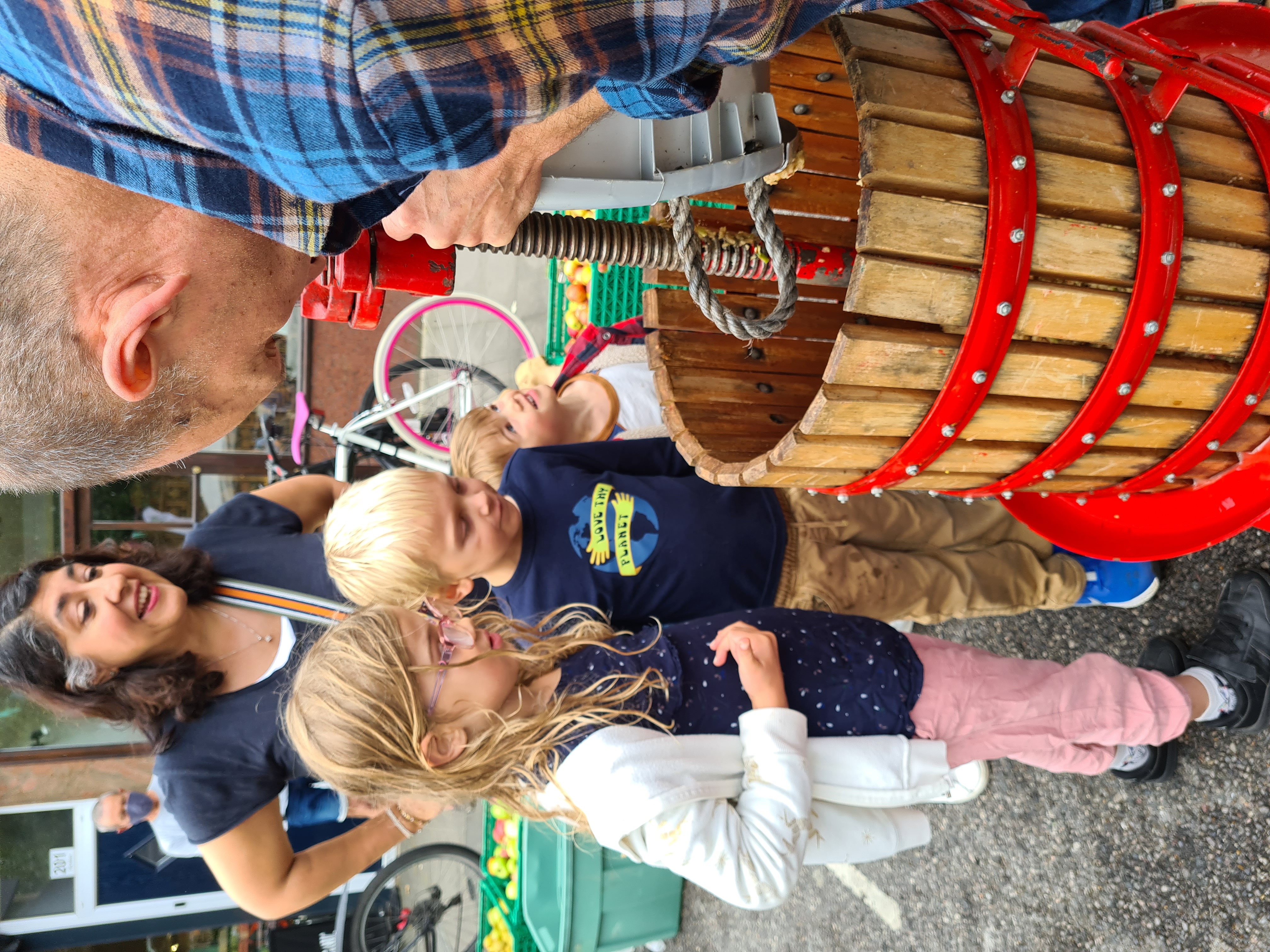 Public gardens – flowers, trees, hedges
We continue to maintain the 15+ pocket gardens we have created around Chiswick.Our flagship garden, at the piazza on Turnham Green Terrace, goes from strength to strength. We have a regular weeding team there, following a bit of a couch grass crisis, and this garden is a tribute to designer Jutta Wagner. At the last weeding session, a passerby asked “Are you people responsible for the joy I feel every time I pass this flower bed?” and this makes the maintenance – much of which is picking out fag butts and beer cans – feel worthwhile. 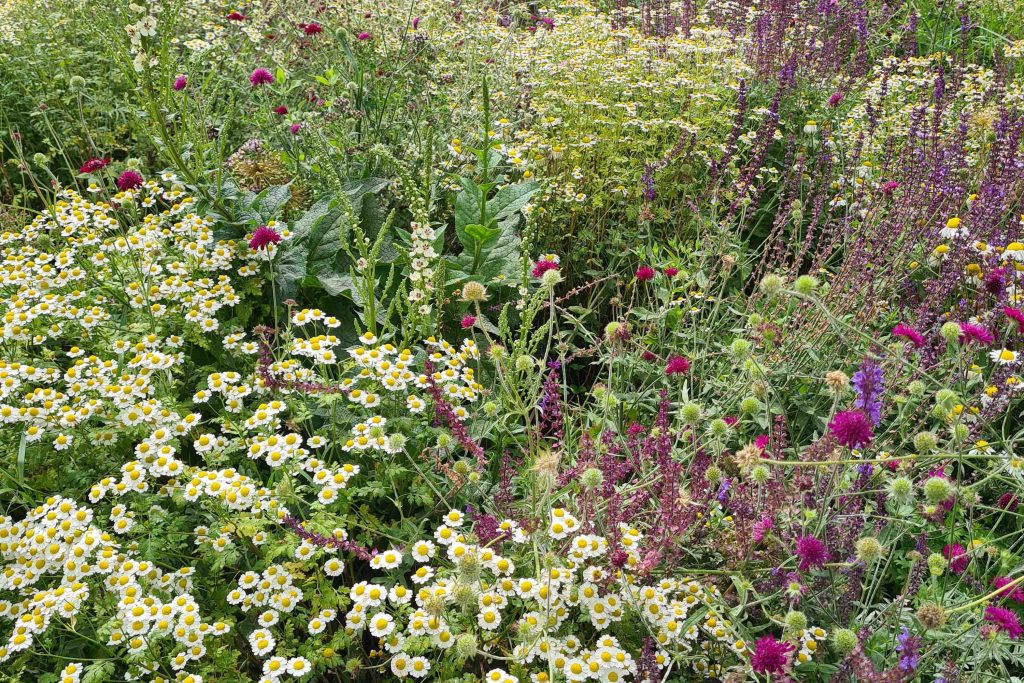 The willow gardens on Fauconberg Road were a triumph of sustainable planting as they survived with no watering and bloomed ferociously. One of the two new willow trees sadly did not survive the handover from Abundance to council watering. 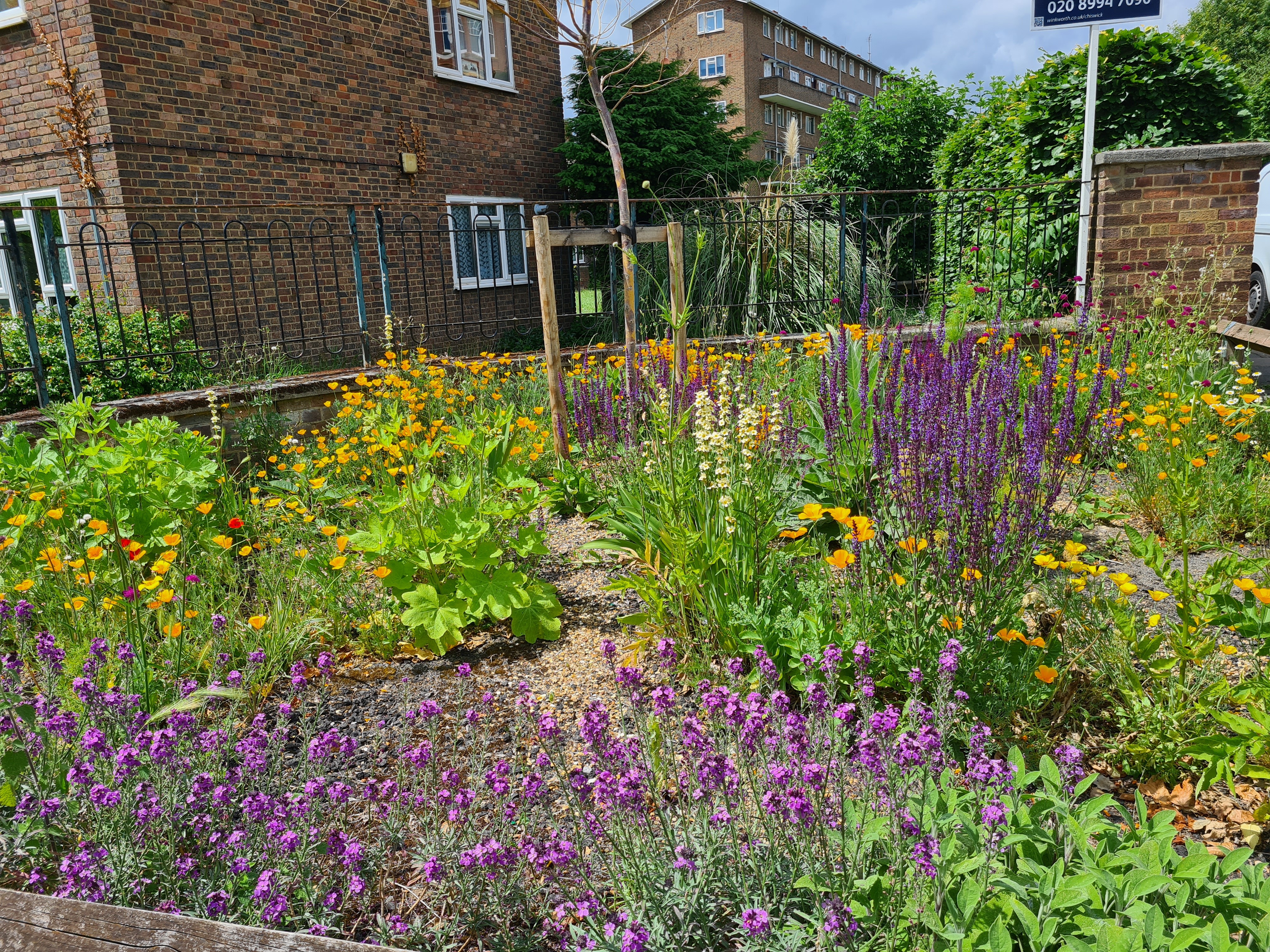 After Abundance’s efforts over the previous two years when we set up our volunteer watering network to help Chiswick’s 100 or so new trees to survive, and achieved a very high 94% survival rate we handed over these duties to the council’s new Environmental Champions manager, aided by the new Greentalk app which we had helped to pilot in its early days.

Art projects
Our Chiswick Timeline mural continues to delight locals and visitors (we are told!). It was awarded protection as a local heritage site of value in the council’s new classifications, the youngest structure to be so honoured.

The W4th Plinth will be changed in a few weeks’ time, to show the third of the works submitted and selected during lockdown. Thereafter submissions will be re-opened for new artworks and eventual public voting.

The Butterfly Wall at the Police Station had received a stay of execution after police HQ suddenly woke up and asked for it to be removed two weeks after installation (we had permission from the local police force) so it’s not clear how much longer it is allowed to stay there.