Well, what a difference a week makes. Much of this mailshot seems to date from a different era, a time when we walked our streets without fear, met with friends, shopped in blithe unawareness, drank in pubs… As a historical record, to keep the memory of those happier days, and in hope of better times after this whirlwind, read on.

Meanwhile keep safe, try to enjoy this most glorious spring. Nature – whether it’s the dolphins in the Venice lagoon, the clearer skies above Chiswick, or the blossom on our trees – continues and even seems to be benefitting from our enforced change of activity.

Grow your own at home

We are launching a series of little videos to help you grow some veg at home. Let’s not pretend that this will make you self-sufficient, but it’s fun, it’s easy and you may well be very happy to eat your own home-grown tomatoes. And many of you are going to have a lot of spare bog roll inners, so here’s how to put them to good use.

W4th Plinth – And the winner is…

David Kimpton and Richard Lawton’s Penny the Orangutan. We had nearly 1,400 votes and it was a photo-finish to the last with Alf Daniels’ Chiswick House Dog Show narrowly pipped by the gorgeous Penny who was originally created using real pennies to raise money for the Sumatran Orangutan Society. We would like to thank all those who submitted images, and all those who voted.

We held what turned out to be perhaps the last public event in Chiswick before the shutters came down. The Cookbook Festival served hot mulled cider, Pizza Treat served delicious pizza slices, we all stood nervously apart from one another. Even the water fountain was finally working. Rebecca Frayn, whose film Misbehaviour had just opened to rave reviews as the cinemas closed down for the foreseeable future, pulled the cord and the huge artwork was revealed. 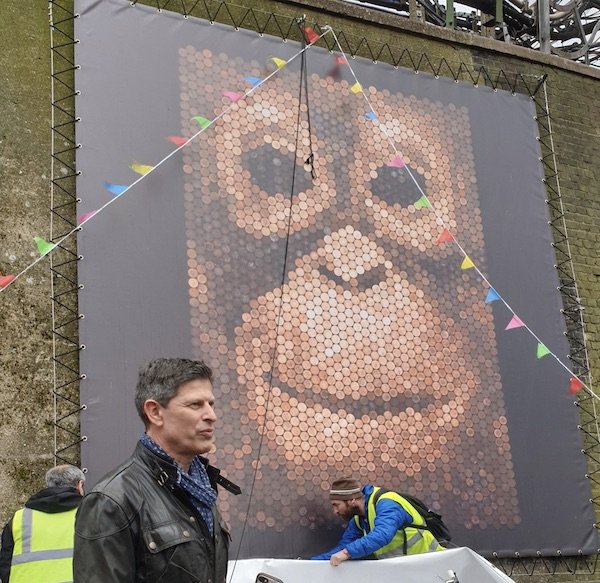 Many congratulations to David and Richard, and we have had many great comments already about the new Plinth.

Submissions are now open for the next artwork, and already some interesting images have been submitted.

We can draw a line of sorts under this unhappy experience. Ten of the cherry trees were planted in Sutton Playing Fields and in treeless streets nearby. Heston Action Group, the fantastic local group there, was very pleased to receive them and promises to look after them well. The remaining six trees were planted last week on Acton Green, still within Chiswick, forming a new avenue of cherry trees to delight Ealing residents for many years to come (and, according to one person, ruin their shoes). Both Ealing council and Hammersmith & Fulham leapt at the chance to take our trees, but Ealing leapt fastest. Hopefully the trees will survive, although they should have been planted a month earlier.

Given the arbitrary nature of the cancellation, Abundance is reviewing who and how (and even if) it works in future, although we will complete projects already begun and continue to maintain the gardens created.

The Great West Hedge In partnership with Steve Pocock from National Park City, Kate Hollis from Park Life West (and St Peter’s School), and Andrea Carnevali from Chiswick Oasis (St Mary’s RC School) Abundance London organised a walk along the A4 with representatives of Transport for London, the London Borough of Hounslow and Hounslow Highways to discuss how to green the A4 – whether with a high hedge to provide a barrier against pollution, a lower hedge to protect children, wildflower verges to improve biodiversity or any other improvements.

The group was made up of the TfL engineer/designer and a communities partnership officer, Hounslow Highways’ tree officers, and Hounslow council’s transport and contracts officers.

We walked on the north pavement from Chiswick to Hammersmith, and then back again to Chiswick, starting at Abundance’s latest experimental flower patch outside the Porsche garage, passing schools such St Mary’s, St Peter’s, the London Free and Latymer Schools in Hammersmith and ending up on the elevated dual carriageway above Harvard Hill Park. All along the journey residents from adjacent groups such as Stilehall Gardens, Furnivall Gardens, Friends of Harvard Hill Park came out to give the officials their views and ask how their area could participate.

It felt like a very positive experience with the officials’ genuinely interested in the residents’ views, and the residents excited to meet and share their hopes.

As a result we identified 69 new tree spots, and made suggestions for hedges (chest height to protect children and cyclists but avoid canyonisation and scary dark areas behind), bulb and wildflower plantings.

TfL is “committed to increasing the number of our street trees by 1% each year, and building a resilient tree population to benefit future generations” but only managed -1.31% (yep, that’s a minus, with 339 planted and 632 removed) last year (2018-18).

So let’s hope that some genuine improvements will result from this initiative; Abundance and the other partner groups (whom you can see on this map) stand ready to help and work with TfL and the boroughs.

Harvard Hill Park welcomes its newest inhabitant, a huge mural of a stag beetle. Artist Mark, aka ATMStreetArt, along with the talented kids from Chiswick School who prepared the smaller insects, has painted a gorgeous stag beetle, representing one of the areas rarest insects. The Friends of Harvard Hill Park also planted up the entrance area to the park, creating the kind of log piles that stag beetles need. These huge beetles are harmless but quite dramatically scary, and people often stamp on them out of fear and ignorance. They should be treasured and it is hoped that this artwork will help remind people.

Other projects that we were involved in have all been delayed. May’s Chiswick Flower Market is hoping to start around September, April’s Blossom Festival on Staveley Road will take place next year, March’s Thames Path walk will be delayed until autumn. Check the specific websites for updates: Chiswickflowermarket.com, blossomdayw4.org.uk, ThamesPathPledge.com